So that was christmas?

All I want for Christmas is to not be sad one day is that too much to ask. 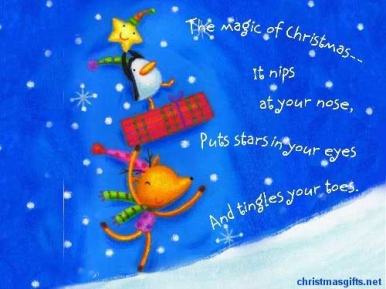 This year, to me, christmas seems like any other day. I know that it is selfish and childish of me to be whining that my christmas this year lacked in its usual panache, but I guess the old saying that you never know what you’ve had till you’ve lost it really comes to mind. I guess I wished and thought that these Christmases would last forever and in the end, everything must come to an end.

I guess I just miss my granddad being around. He could bring a smile to my mum’s friend instead of her being a down in the dumps woman who is getting down on her self about the fact that my father is having another one of his temper tantrums about this that or the other because my granddad would shut him up and tell him to grow up, which now no one can do. If my granddad was still here than my mother would not have to cook and we’d have been able to get out of this house.

I don’t know what it is, but I guess to me this year, Christmas was just like any other day of the week, just with more food and a few gifts. Is it just me? Or has christmas just disappeared? I really want that christmas spirit back and I guess I will just have to wait until I have children to get it back.

Once I have children, I’ll give them their gifts and watch them open them with glee. I’ll give the breakfast and play with them in the morning. I’ll take them to their grandparents and we’ll have a big family dinner. Then I’ll put them down for a nap, when they are young and then we’ll have tea before playing a board game. It’ll all be fun. I guess I just want the magic back.

Is it bad when you look forward to New Year‘s Eve and going clubbing with your friends rather than having Christmas at home with the family? I guess you could blame it on the fact that I am 18, but having a sick sister, an even sicker and angrier father, a sick cat, a depressed mother and an upset middle sister at christmas really doesn’t get my heart going anymore or my stomach twanging with butterflies.

2013 had better be better than this. I have to keep my spirits up and believe that 2013 will be better.

The older I get the less Christmas Spirit I have…

18 and at University. Good with computers, well I have to be when I work with them and getting a degree in them, I guess. I live at home with my parents and two sisters. Not much really, but I am the Oddchildout.
View all posts by oddchildout →
This entry was posted in Dealing, Life in general and tagged 2013, Child, Christmas, Christmas Spirit, Clubbing, Dealing, Depressed, down in the dumps, Family, Feeling down, Friends, Getting older, Granddad, Grandparent, Healing, Holiday, Home, Live, Losing my Christmas Spirit, Moving on, Mum, New beginnings, New Start, New Year, Opinions, Relationships, Religious, Sadness, Santa, Santa Claus, Sickness, temper tantrums, Thought, Where is Christmas?. Bookmark the permalink.

3 Responses to So that was christmas?